How to make Profits from the Wolfe Wave

To better pick good Wolfe wave entry and exit, you must understand the setup rules.

Wolfe wave is a natural pattern in the market formed by forces of demand and supply.

It is very versatile and occur in a wide range of time frames, over minutes or even as long as weeks or months.

The pattern is named after Bill Wolfe, a trader who specialized in trading the S&P500 index and who is credited with first describing the Wolfe Wave trading system and inventing the indicator that goes by the same name.

First, take a look at this illustration below;

From our illustration above, a Wolfe Wave pattern consists of 5 waves, with the 2nd and 4th ones being the retracement waves.

Rules for identification of this pattern include:

Let’s start with the most important;

EPA means Estimate Price at Arrival. It estimates how far price will move in extended into the future. Hence, EPA line is the Take profit level

EPA line is always drawn connecting points 1 and 4, regardless of whether the wolfe wave is bullish or bearish.

This is not very significant in trading the pattern so it is a line that shouldn’t really bother you. Well, it does no harm to know 1 or 2 things about it.

If you’ve booked airplane tickets, you’d know what this means. It stands for Estimated Time on Arrival.

In wolfe wave trading, the ETA line is used to estimate at what date price will arrive at the apex of the two converging lines.

But like we mentioned above, the EPA is the most important line so keep your focus on it

The 3 common places where Wolfe wave can be found are these:

Now let’s do the really fun part; how to trade and profit from the Wolfe wave

How to make entry on the Wolfe Wave

Here, am assuming we have identified the Wolfe pattern formation on the chart at we are at point (wave 5). So what exactly triggers the buy or sell signal/entry?

Take a look at the chart below.

From our above GBPJPY,15 minute chart , the trigger for the sell entry was the engulfing pattern that closed below the trendline.

Let’s look at another example below, this is bullish Wolfe wave on the GOLD hourly chart.

On the above chart, you can see the confirmation for entry was the inverted hammer on wave 5

How to Set Stop Loss on the Wolfe wave.

Like i always mentioned, a stop loss is your risk control measure.

In Wolfe wave trading, the Stop loss for bearish pattern is place just above wave 5 as shown the GBPJPY chart below.

On the bullish wave on Gold below we set the Stop loss just below point 5 as shown below. The lowest low of wave 5

How to set Profit Targets on Wolfe Wave pattern.

The EPA line is the target area on the pattern. EPA line is always drawn connecting points 1 and 4, regardless of whether the wave is bullish or bearish.

Take a look at the bearish Wolfe on GBPJPY below. The profit target is when price hits the EPA line as shown below

Same applies for the Bullish Wolfe below on the GOLD Hourly chart. The EPA line is drawn connecting wave 1 and 2. The target is where price meets the EPA as we mentioned above.

In conclusion, the Wolfe wave pattern is very profitable if you follow the basic rules.

It has one of the best risk reward ratios i.e the reward is always great as compared to how much you are risking.

The pattern appears on all time frames and that’s why it has potential to make you money every single day. 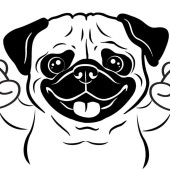 Profiting from Head & Shoulders Pattern, NOT the Traditional Way

Rules we use in trading